The Safadi Foundation, with which LAU collaborates on many outreach and civic engagement activities, will host an event titled “United We Celebrate, Divided we Fall” at LAU.

"Hyphen Islam Christianity" is a project that reveals the unknown beauties of Lebanon and takes you to the heart and soul of the lives of Christians and Muslims living together in Lebanon. It shows that it is possible for different religious identities to live in harmony in the same space.

The entertainment will be presented by the Tripoli Fayha Choir, directed by Maestro Barkev Taslakian, which is composed of young women and men from different backgrounds and religions, reflecting the real image of Lebanon. Their songs come from the Arabic, French, English, Latin and Armenian heritages. This diversity reflects the choir’s openness to human historical richness and diversity. Through music and a documentary, "Hyphen Islam Christianity" and Fayha Choir believe that together they can change mentalities, using art, culture and richness to unite people. 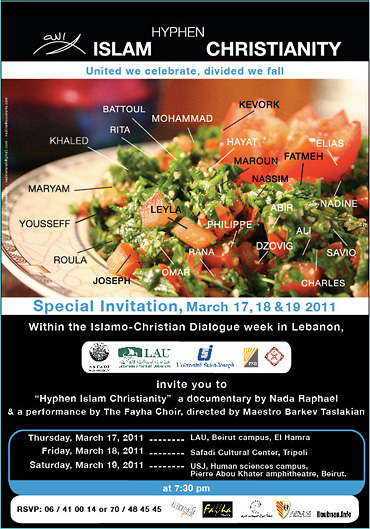