The Doha Film Institute (DFI) is collaborating with LAU’s Communication Arts Department to bring this traveling workshop to Beirut. "Harrer, Harrer" is a seven-day storytelling workshop comprised of participants working together to tell stories about the recent revolutions in the Middle East. Participants will create fictional one-minute films based on their personal connections to the recent historic events. The goal is to capture the essence of the revolution and communicate human emotions through characters.

During the workshop, students will:

The films will be uploaded and distributed on a web platform and become part of an international exhibition that will be launched at the 2011 Doha Tribeca Film Festival. 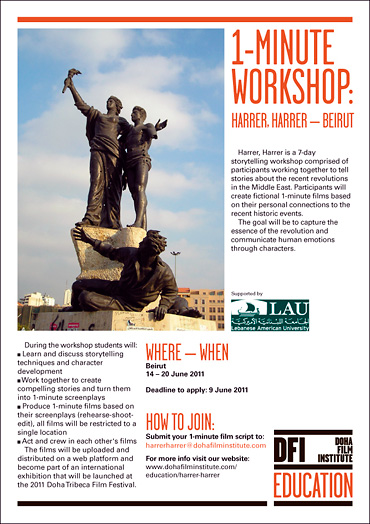