“A Case Study in Recycling at the Communal Level”

The Department of Social Sciences and the International Affairs Club are organizing a lecture titled "When Policy Meets Technology: A Case Study in Recycling at the Communal Level" conducted by Ziad Abichaker.

The lecture will tackle various issues such as the state of recycling in Lebanon, major governmental initiatives implemented and the role of environmental organizations and Lebanese parties in this respect.

Ziad Abichaker is a multi-disciplinary engineer who specializes in building Municipal Recycling Facilities at the communal level. He is the recipient of an American Society of Agricultural Engineers (ASAE) design award in 1993 for his design linking municipal waste management to agriculture. In 2001, he received the Ford Motor Company Environmental & Conservation award for the Middle East. He was recently named Arab Social Innovator for 2011 by Synergos institute in New York City, USA. 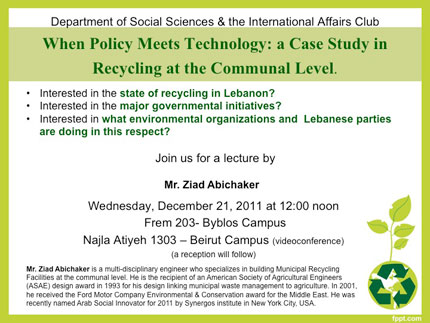