“Developing a Fashion Programme at LAU”

The Department of fashion Design at the School of Architecture and Design is hosting a lecture by Dr. Nicolas Cambridge titled: “Supporting the New Precariat: Developing a Fashion Programme at LAU.”

Dr. Nicolas Cambridge was trained as a fashion designer in London. After working on a freelance basis in the Japanese fashion industry he opened a design studio - presenting the creative outputs in exhibitions and fashion shows in Tokyo. Returning to the U.K., he obtained a master’s degree in the study of contemporary Japan before enrolling as a doctoral candidate at the London College of Fashion, University of the Arts, London. He received his Ph.D. in 2009 for a thesis entitled Son of Samurai, Daughter of Butterfly: Fashioning Japan in the Sartorial Culture of the United Kingdom 1980-2006. 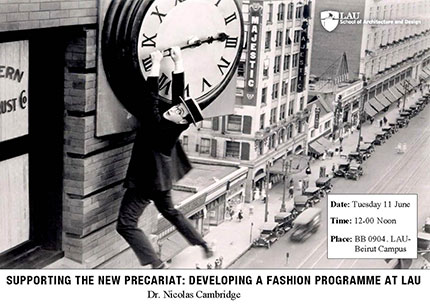