”Limaza…” is a social political tragic-comedy written by Mahfouz in 1971.

The play raises the fundamental question of: Why murder and for what reason? It also tackles the struggle of the individuals for the Palestinian existence. The purpose of resistance as seen by Mahfouz is that of liberation. It is advocated through the stories of Sirhan Sirhan, Farjallah El Helou and Antoun Saade, who accepted death; the true test of an individual’s standpoint.

The standpoints of these freedom fighters are acted out in a nightclub where the customers perform their stories; hoping it can evoke a moment of truth in this overwhelming Arab Coma.

The play has not been performed since its first run in 1971. The choice to produce it now sheds light on the situation of acceptance and numbness of the Lebanese and the Arabs. Nothing has changed since, for our revolutions are still revolutions of individuals and not of the masses. 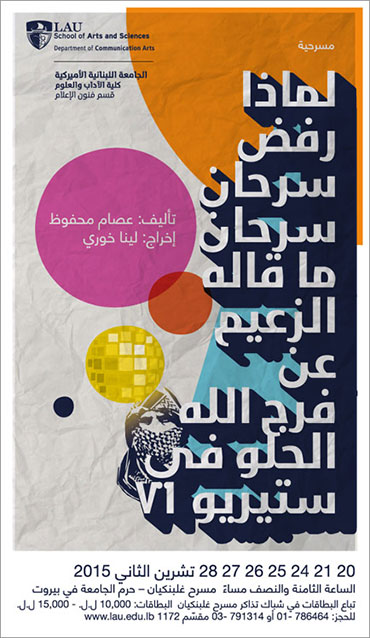