Film Screening: “Rim and Her Sisters”

The Department of Communication Arts at the School of Arts and Sciences is hosting the film screening of Rim and Her Sisters, in the presence of his excellency Peter Semneby, Ambassador of Sweden.

When bombs began to fall on the city of Tall Kalakh in Syria, Rim only had one choice – flee. In Rim and Her Sisters, Leyla Assaf-Tengroth explores how Syrian women live in the shadows of war. The documentary follows the fractured quotidian life of Rim and her siblings as they escape the escalating war in their homeland. Rim, the eldest of her two brothers and eight sisters, fights to keep her displaced family in Lebanon united despite their uncertain future. Rim and Her Sisters highlights the remarkable desire for political and religious freedom in the face of great obstacles in the Middle East.

Leyla Assaf-Tengroth is an award winning film and documentary director, screenwriter and producer. Some of her films are Frihetsligan (1994) and Amelia (1991). Her films and documentaries have been shown on Swedish Television, in several European countries as well as in the US, Canada and Australia. Leyla is a Lebanese who has been living in Sweden since 1966. Her films often deal with sociopolitical problems and environmental issues. They are known to reflect much engagement and insight. 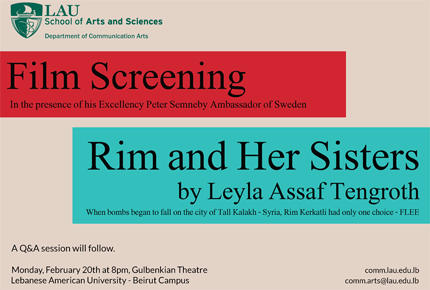