Role of Media in Defense of Public and Private Liberties

Joe Maalouf is a Lebanese media figure. He holds a B.S. in Computer and Communications Engineering (CCE) from USEK. He started his journey in the media world in Jaras TV (2006) and was characterized by his show “When the case is opened” “عندما يُفتح الملف”, where he boldly investigated a lot of social cases. Maalouf entered the realm of TV via his show “You are free” “إنت حر” on the MTV Lebanese Channel (2012) in which he addressed the issues affecting the Lebanese citizens at all levels, and the program achieved wide acclaim. He then moved to LBCI to begin a new chapter of freedom through his ” Speak straight” “حكي جالس” show (January 2014 - July 2016). Today, Maalouf continues his appearance on LBCI in his show, ” Air of Freedom”  “هوا الحرية” which started in October 2016.

To attend, kindly register here  preferably by the 2nd of April 2018. 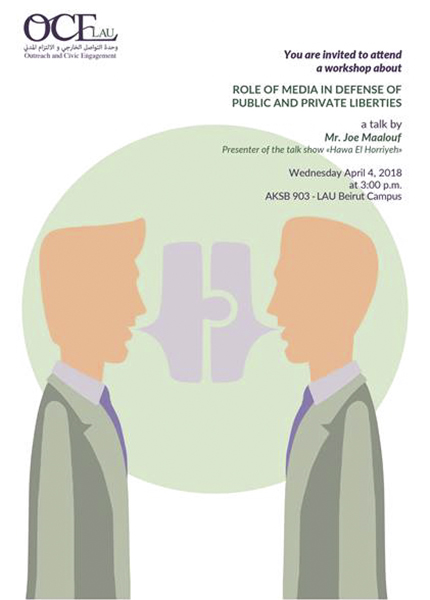