The Outreach & Civic Engagement Unit (OCE) in coordination with the Offices of the Dean of Students is hosting its 24th SOFT SKILLS SERIES (SSS) workshop titled: “Anghami, a Tale of Passion, Persistence and a Lot of Sweat”, honoring Mr. Elie Habib.

Elie Habib, an LAU alumnus, is the co-founder of Anghami, the leading music streaming service in the Middle East. In late 2012, seizing the opportunity of a lack of proper digital music service in the Arab world, Elie and his partner, Eddy Maroun, launched Anghami (which means ‘my tunes’ in Arabic). Since then, Anghami has reached over 75 million users, streaming a billion track each month. Anghami successfully raised over $30 million from VCs and partnered with MBC, the top media group in the region, to raise digital awareness. At Anghami, Elie runs the operations and product development, spending most of his time working between clouds, streams and pixels. Elie was selected as Lebanon Top Innovator in 2018 by Forbes, Endeavor High-Impact Entrepreneur in 2013, and Lebanon Top Entrepreneur in 2012 and 2013.

To attend, kindly register here preferably before the 2nd of December. 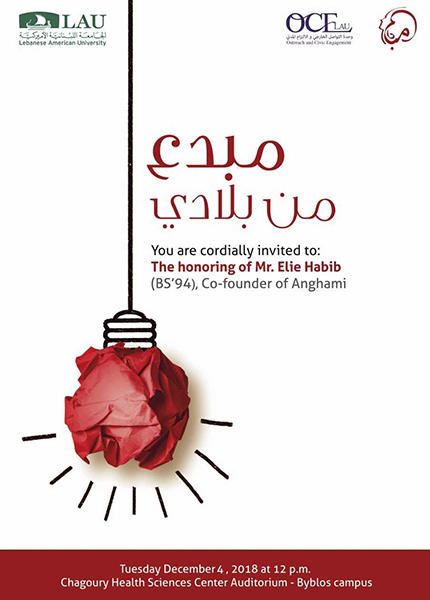