Ana Mou Mazharieh (I Am Not a Vase), a play directed by Associate Professor of Theater Lina Abyad and co-written with Madonna Adeeb, will be performed by members of the Shatila community and LAU students.

The play celebrates brave women who refuse to be looked upon as simple, ornamental objects with no true societal value or contribution, like a vase.

The play is produced by non-profit organization Sharq, in partnership with The Arab Institute for Women at LAU, Alexandra Sandels Firma, Swedish Institute, and Basmeh & Zeitooneh. 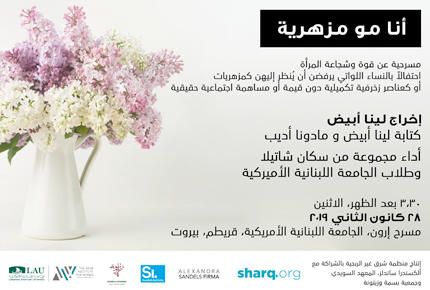